I read this book over two months ago, and realized just now that I had forgotten to review it. Blame it on the madness that was my life when we were relocating back to the UK.

Raihana, a refugee from war-torn Afghanistan has been offered refuge in Denmark, thanks to a distant cousin of hers. She doesn’t know what happened to her husband, doesn’t know how to find out either. All that she can do is try putting away her past, and  forge a new life for herself in a strange land, where she did not even know the language.  As an immigrant in Denmark, she needs to learn Danish, and starts off in a language school. Part of the process of learning Danish is working in some sort of business so that the immigrants learn how to speak Danish and blend themselves with the local culture better. Most of her compatriots end up working stocking shelves in supermarkets, but Raihana apprentices herself to a widowed beekeeper, Gunnar. She thinks that it is rather apt, because she finds that Danish sounds like bees buzzing, to those who don’t understand it.

Gunnar is a recent widower. Ever since his wife’s death, he has not been himself. He has not bothered looking after for himself, or the bees that he and his wife tended to, so lovingly. His friends and family have been worried about him, but soon, they have another worry – his new apprentice, Raihana. Gunnar himself was not jumping with joy at having Raihana in his house. He preferred to be left to his own sorrow. Nothing mattered to him any more. However, once he got over the shock of having Raihana as his assitant, he slowly starts pulling himself together. Slowly, he goes back into the bees, and starts teaching Raihana, everything he knew.  Teaching the young refugee about bee keeping and Danish seemed to have a therapeutic effect on Gunnar himself. Slowly, the immigrant and the widower forge a bond, a friendship, which is not viewed by others around them very kindly.  A friendship that is as strong as it is unexpected. Just when Raihana starts getting comfortable in Danish society, and pushing her past out of her mind, when she is forced to confront certain realities.

I loved the premise of the story. The lives of immigrants, of refugees who are forced to leave their country, sometimes to save their lives, sometimes to forge a better life and the ways in which they integrate themselves into the host country. Some like Raihana, go for it, wholeheartedly, giving it their all, while some, like some of her neighbours, just do what they have to do, or live off benefits. For a change, the book also looks at the situation from the point of view of the people of the host country. The reasons or prejudices why they find it difficult to help the refugees integrate. Of how it takes two to tango,  it is as important for the hosts to be welcoming as it is for the immigrants to want to integrate. And above all, irrespective of the differences in outward appearances, internally, we are all the same, with the same type of emotions, and attachments. The story is also about Raihana as a person and her reactions, and her ways of adapting herself to the new place she finds herself.

It was a beautiful story, a change from the regular run-of-the-mill sorts. The characters were well fleshed out. You could completely understand where each of them were coming from.  The whole situation is handled in a very simplistic way, not really getting into more complex issues surrounding immigrants and their integration into the host country, but I think the book did achieve what it set off to do. There are a few things which do not quite sit right. Like the cover picture. It shows a woman in a hijab, but Raihana herself did not wear one, in fact she resisted pressure from others around her to wear a hijab. But that is a minor point, really, one that did not bother me too much. A book that I would certainly recommend. I would give it a 3.5/5.

Amulya Malladi is an acclaimed author of five books. She was born and raised in India. She now lives in Denmark with her husband and sons.

This book is available from Amazon and Flipkart(India). I got it from Blossoms, the second hand book store in Bangalore, and it was an absolute steal!

Recommended by Saks, it took me a while to get hold of it. And just like all the books she recommends, it was priceless. 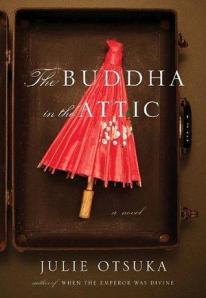 The tale of young Japanese ‘mail order brides’ who left Japan to come to America for a multitude of reasons, all believing that the migration would do them good, in one way or the other. The book charts the collective life of the brides. From the time they board the ship to the time the Japanese disappear after Pearl Harbour. Then they all left, while one of them left behind a ‘Buddha in the attic’.

All these young women, have one thing in common, when they board the ship. They are all looking for a better life. They have all a picture of their future husbands, which had been sent to them telling them that they would have comfortable lives in America. As they reach America, some of their dreams and aspirations are shattered, some are wives, some have just been sold, some are lucky enough to get what they were promised. Some were not even lucky enough to complete the journey. Some become laborers, some become maids, promised by their husbands to their employers. All of them realise that the English that they practiced was of no use. Their lives as wives, workers, mothers and immigrants in America. Holding on to their culture and beliefs, they struggle to bring up their children who are in a hurry to shrug off their cultural baggage.

A powerful tale, sometimes which sometimes takes shape of a story, sometimes a poem, sometimes a collective voice, and sometimes that of an indivudual. It’s a great book, and one that gives great insight into lives of the women, and the migrant Japanese community at that time. It also gives an insight into the way migrant communities work all over the world. The style in which it is written is unique, one that I haven’t read before, but extremely effective. It brings to the reader the lives of the women in a very strong and emphatic way. A book, that will stay with me for a while. A quick, un-put-downable read.